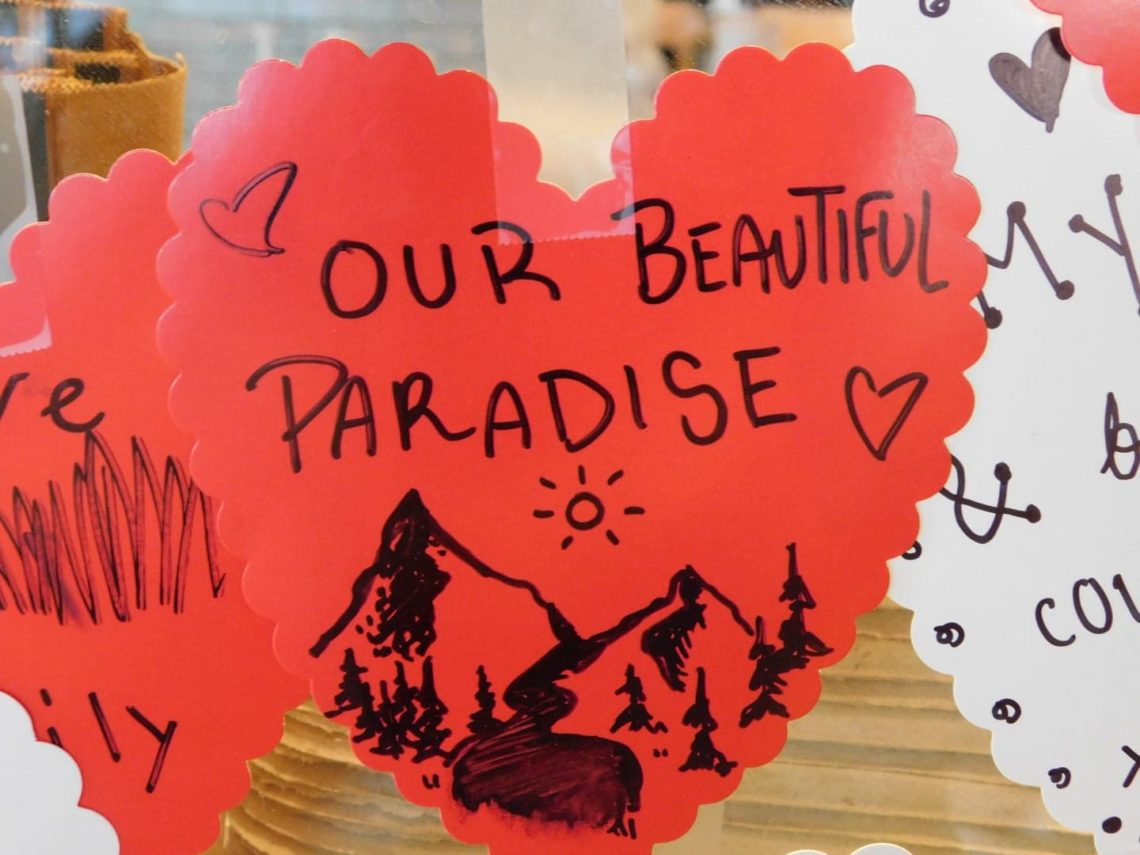 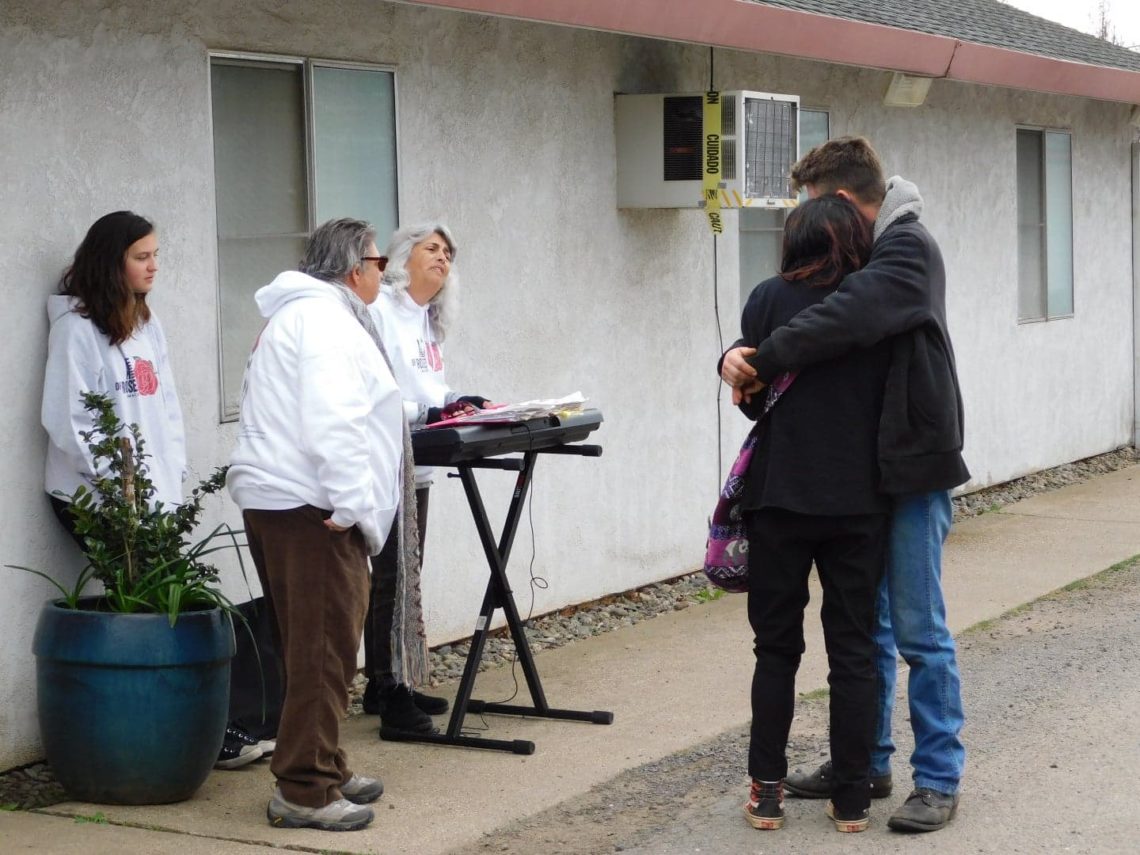 Stephanie: I was in the Hope Center, a woman came in.. Lorry Anne. I noticed that she had a joyful spirit. I gave her a rose and told her about Gods love. Then I asked her if I could pray for her. She told me her story, escaping from the flames but loosing her house. She was greatful that she was alive. She chose to be joyful because  a negative spirit does not get you anywhere. She has income but needs to find home in April. We prayed about that that she will find a home and get settled and that her home be used for God’s glory. We hugged and said good by. 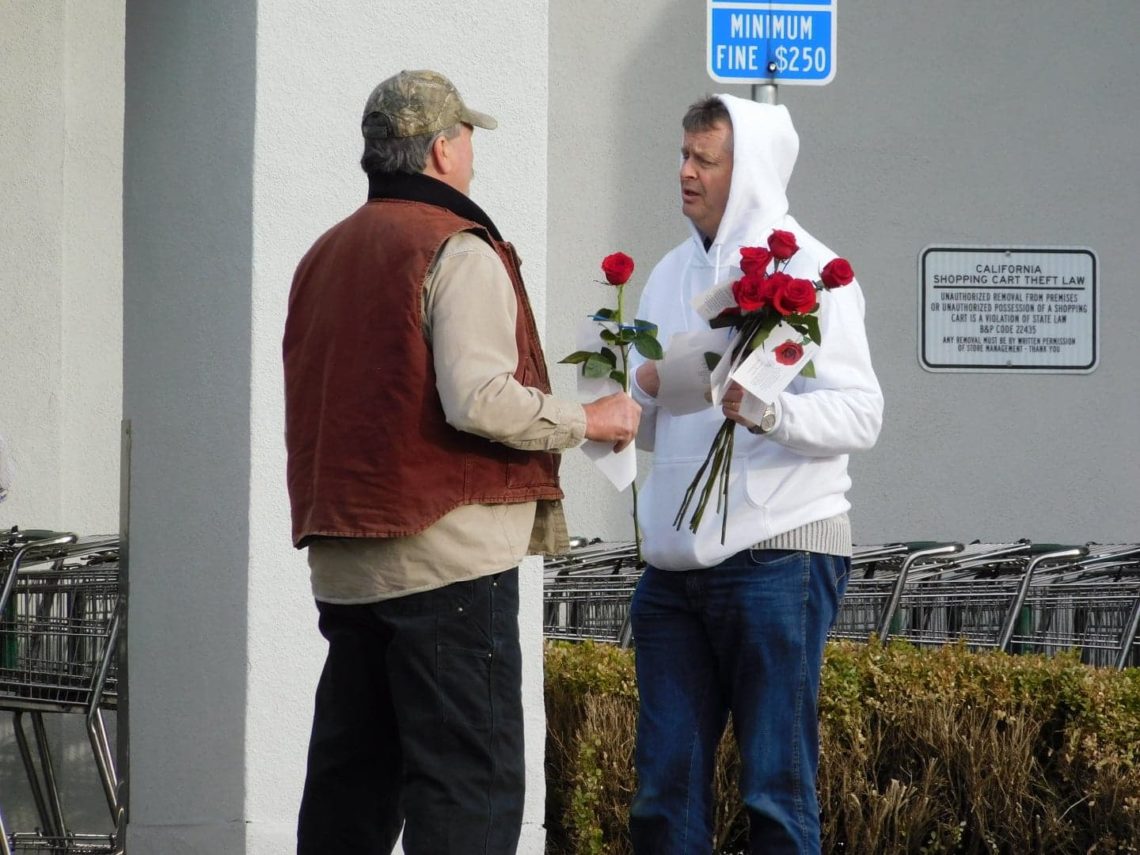 Jurgen: We came to the Paradise Town Hall and Gary met a couple at the door. I walked inside to the counter and gave the gentlemen there a rose, telling him that God loves him very much and that I am glad he is alive and made it through the fire. He was very interested and touched. He asked more questions and I started sharing  with him my story about Dachau, and what Sally with a team was doing there once, and how it touched my heart. Meanwhile a lady came by asking what this is about and the man at the desk told her that is is a good thing about hope. She said very directly to me that we could not give any roses away and she does not want this here. I still kept talking to the man and sharing more about Jesus and God’s love, and he seemed very touched. It was a very encouraging encounter in the Lord.

Mallory: I was in the breakfast room and Clyda is eating breakfast and I asked how she was doing. And I asked if she had lost anything. And she proceeded to respond that she had lost everything—her home, but she was able to save her 3 precious dogs. She told me the new house is almost done but PG&E keeps putting her off month after month, so she cannot live in the house because PG&E keeps telling her next week, and it’s been months. People are breaking into her shed and stealing all her personal items for her new home. So then I asked if I could pray for her and Jurgen walked in. So Jurgen is listening to it all and I pray for her about PG&E that God would show her favor and I told her it doesn’t matter what PG&E says, but what God says. And she was very emotional, with tears in her eyes. And then Jurgen starts talking to her about the Shepherd leaving the 99 and going after the 1. She is more emotional and Jurgen kneels down and he starts giving her the salvation message. She raises her hands and starts repeating the salvation prayer and accepts Christ. And she is crying and we hugged her and invited her to the conference.

Randy: We went over to the FEMA trailers and I had a really great conversation with a man about the same age who had lost his house. It seemed like he had insurance, but he had heard the gospel a little bit as a child because his parents sent him to church. He was open to hearing the gospel. He had gone through his life and never really pursued God or been back to church, but he was sensitive to hearing what I said about the Lord. I suggested he go to Sam and Heather’s church and check it out. I asked if he had a Bible. It sounded like he had a Bible once, for a week in his life.  It was a Family Heirloom Bible and then he gave it back, because when he read it, it didn’t make sense to him. 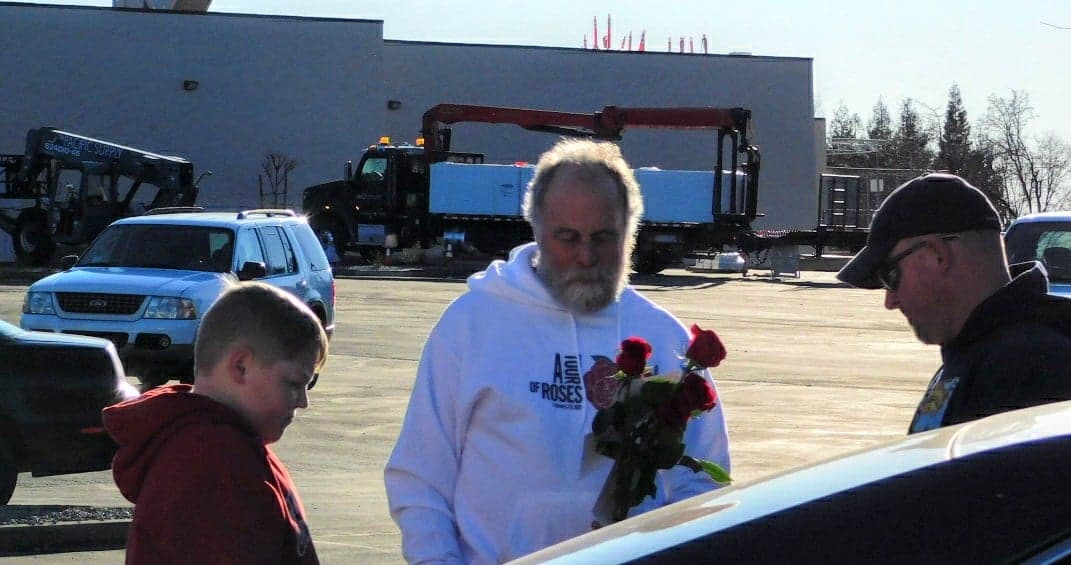 So then we had to leave to go to the Relief Center. It used to be the Nazarene Church and I went in and immediately saw on the bookshelf lots of Bibles. And I looked through them and found a beautiful new Living Translation, which is my favorite to give to people. I asked the young lady who was in charge if I could have the Bible and she said, “Absolutely!” I left, went across the street and gave him the Bible.

Then I asked the young lady at the Relief Center if she believed in the Lord. She said, “No.” She had gone to church and Christian school when she was younger, because of her aunt and uncle who were evangelists.

We talked for awhile and I shared some of my testimony until she said, “I don’t want to talk about it anymore. I don’t believe in it. I take a scientific approach to life.” She shared with me that she did the work at the Relief Center out of compassion and she is a social worker. And we left on good terms. A few minutes later she came out and asked if she could take a picture of us all.

Raul: We were at Starbucks and  we met this woman named Alma and her daughter, Mary. We shared that we wanted to give a rose to her and that God loved her. We asked how we could pray for her and she said she was feeling fearful because her ex-boyfriend beat her physically. As soon as she said that Mallory told her about her real worth before God. And I felt the compassion of God and apologized to her on behalf of men and said that a Godly man should not be doing that.  She was deeply touched and then we prayed for her for God’s comfort and love. 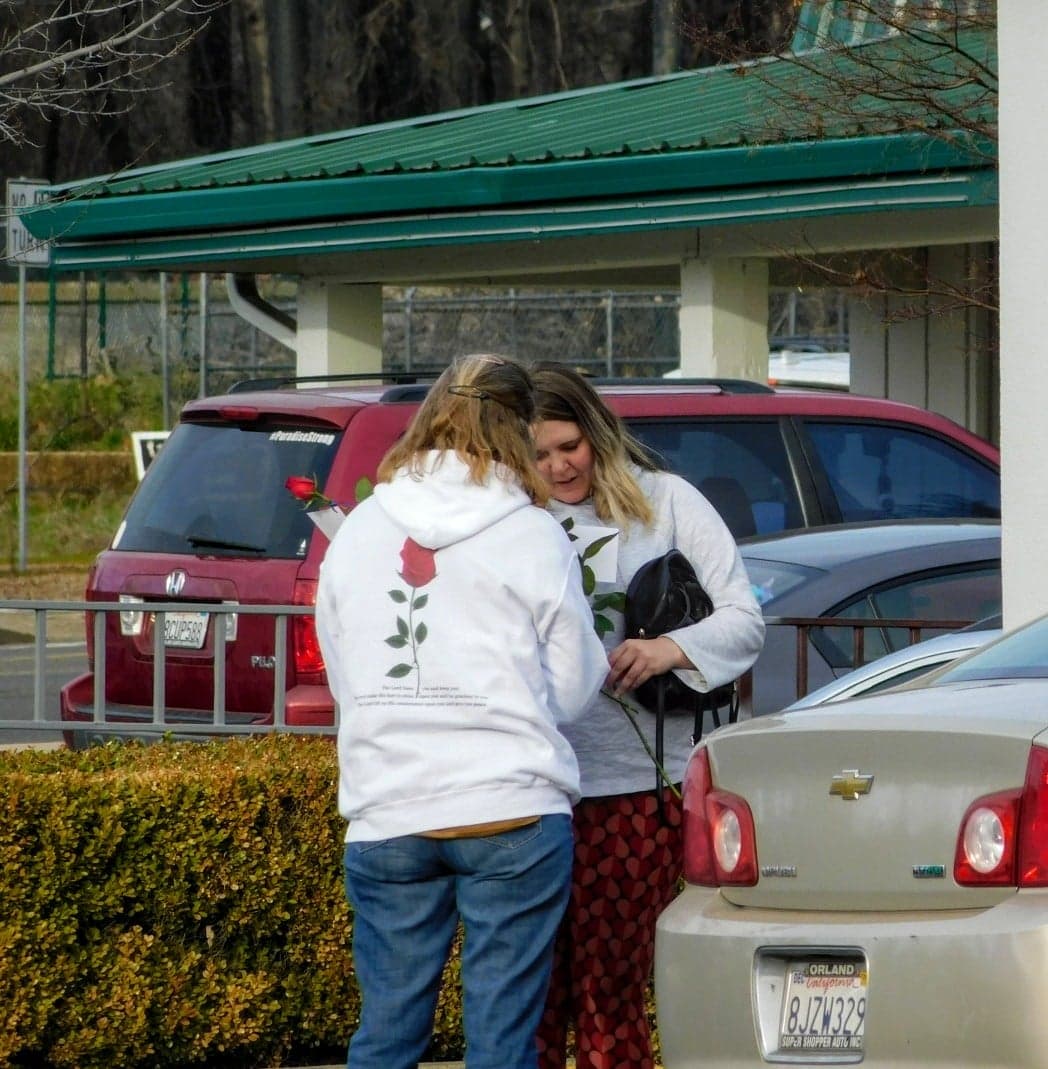 Yara: Today we were at Starbucks—on the sidewalk—giving out roses and a lady walked up to me. I told her I have a free gift for you. She said, “Oh, isn’t that lovely.”

I told her what the rose was for. She looked surprised, but in a good way. She said, “So many people need help around here.” I told her we are a small group, mostly from L.A. and we wanted to come up and share God’s love with the community. She said, “That’s really nice of you guys to do.” I asked if there was anything we could pray for her. She said, “Her friend Dina needed prayer because she was a having a hard time getting her money and housing from  the insurance.” I asked if it was ok if we could pray together and she agreed. We talked a bit more and she kept saying, “I’m glad you guys are here. This community really needs this!” 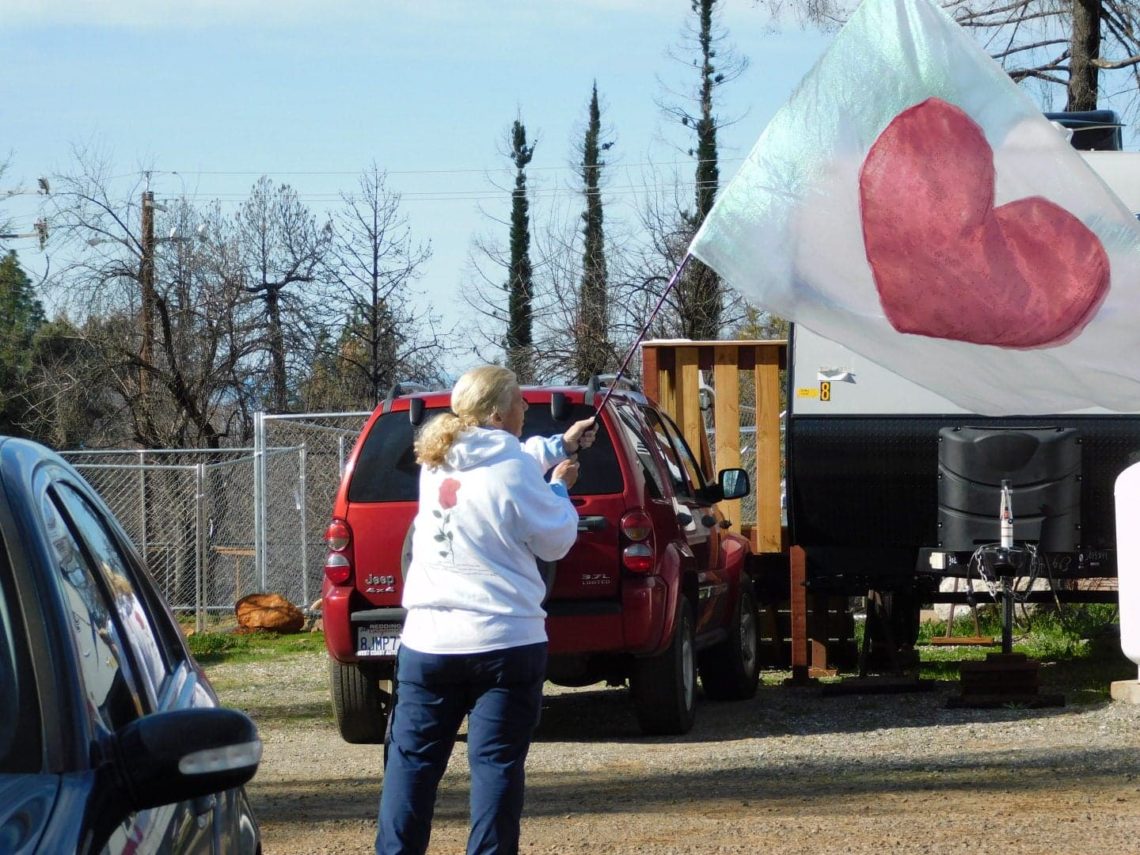 Dave: Today we went to the FEMA trailer area. I went and prayed over the land as Sally worshiped and Mallory danced with her flags. The scripture that came to me was when Moses threw the stick in to the waters of Mara and it made the bitter water sweet.  I felt the Lord saying that I should pray that and do that kind of gesture as I prayed. And then I walked to another area and I was reminded of some of the atrocities that happened on the land in that area. And the scripture that came to me was when God spoke to Cain after he killed Abel and said to Cain the blood cries out. So I prayed that whatever blood was spilled there would be washed away by the blood of Jesus and be silenced. And I felt real authority over the land to pray and bless it and call forth life. And as a Native American I felt real authority, like God had me there for that reason.

Gary: Jurgen and I went to a women’s clothing store and were well-received, and handed out three roses. The owner of the shop said she would put our conference flyer in the window. She said we could pass roses out at her restaurant next door. I met a young lady named Caitlin who is studying chemistry on her Mac computer. I studied chemistry and we started a lively conversation about science and math. She shared that she wanted to get into Chico State to earn her Masters and Teaching degree at the same time. Jurgen asked if we could pray for her and she said she didn’t really believe in God, but it was ok to pray.

Jurgen prayed for God to reveal Himself to her and then I prayed for God to heal her extremely high blood pressure and rapid heartbeat. Jurgen talked about Jesus standing at the door and knocking and all we have to do is open the door to Him. Then I shared my testimony with her about how it was possible that God could actually exist but I didn’t really know if He existed because I wasn’t sure. I shared that I just opened my mind to the idea that it might be true and it started changing the way I thought about my world. After a couple months God had moved into my heart and I knew He was real. She smiled and seemed to receive the story with gratitude. 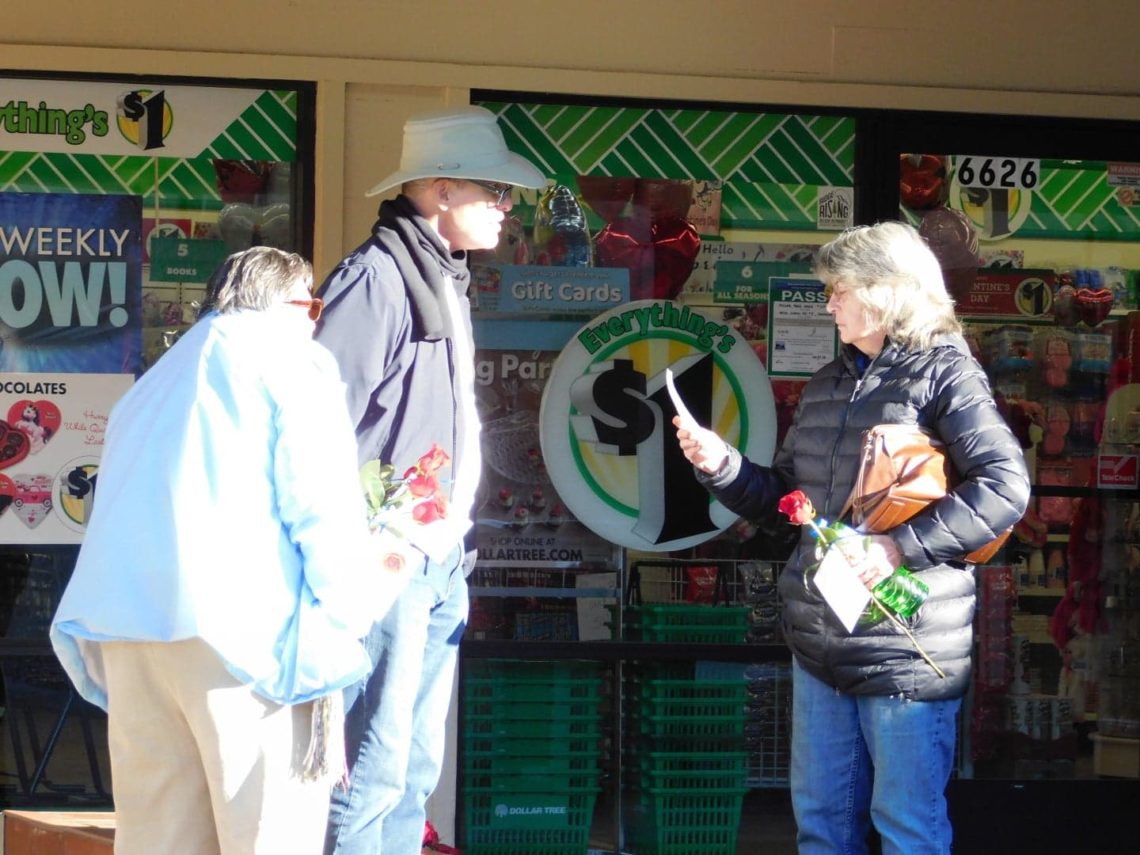 I also met an elderly couple coming out of the city planning office. The woman had moved out of Paradise a short time before the fire, but her 5-generation home in Paradise was lost, along with many valuable antiques and keepsakes. She was having a very hard time listing them for the insurance. I prayed for her, and one of the things I said was that she should stop beating herself up. When I ended with her she had tears in her eyes. She said that the word about not beating herself up was very significant. Then her husband told me she had PTSD from the fire and I prayed for healing. I was very touched by their sense of gratitude and appreciation and felt like the Lord had really moved. 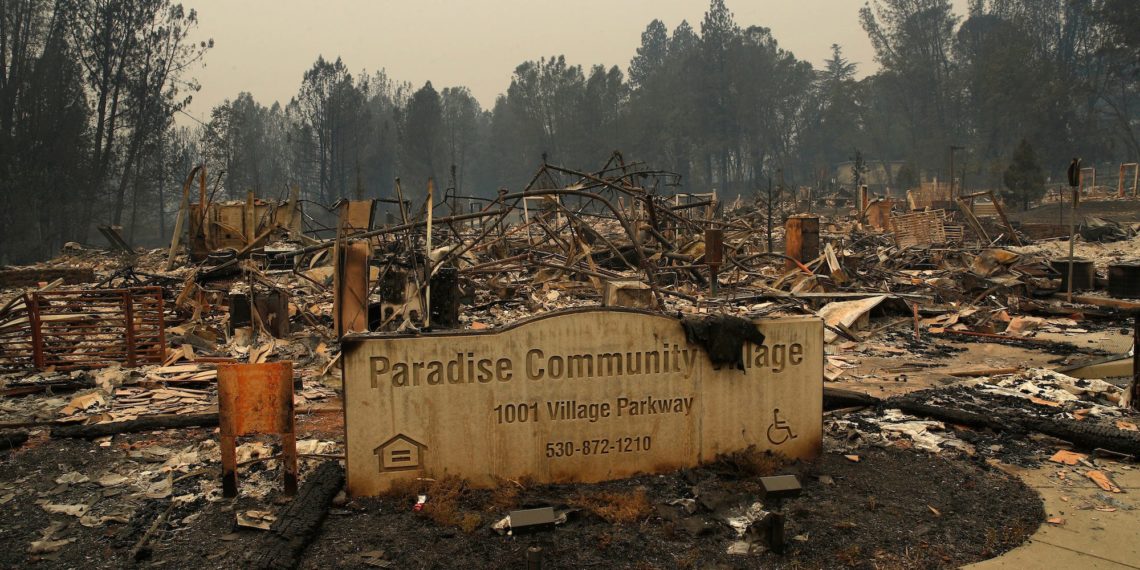