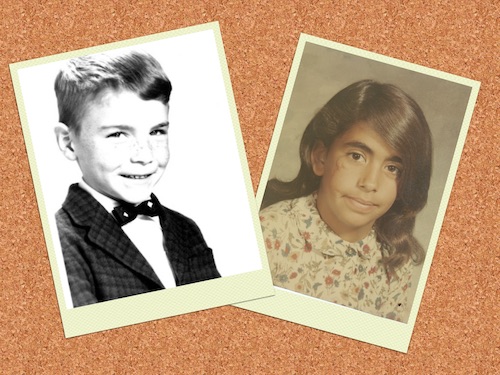 We were young, although not as young as many. There was some seasoning in our years. But we still foolishly believed the lines of the Captain and Tennille’s hit song of the 70s, Love Will Keep Us Together. 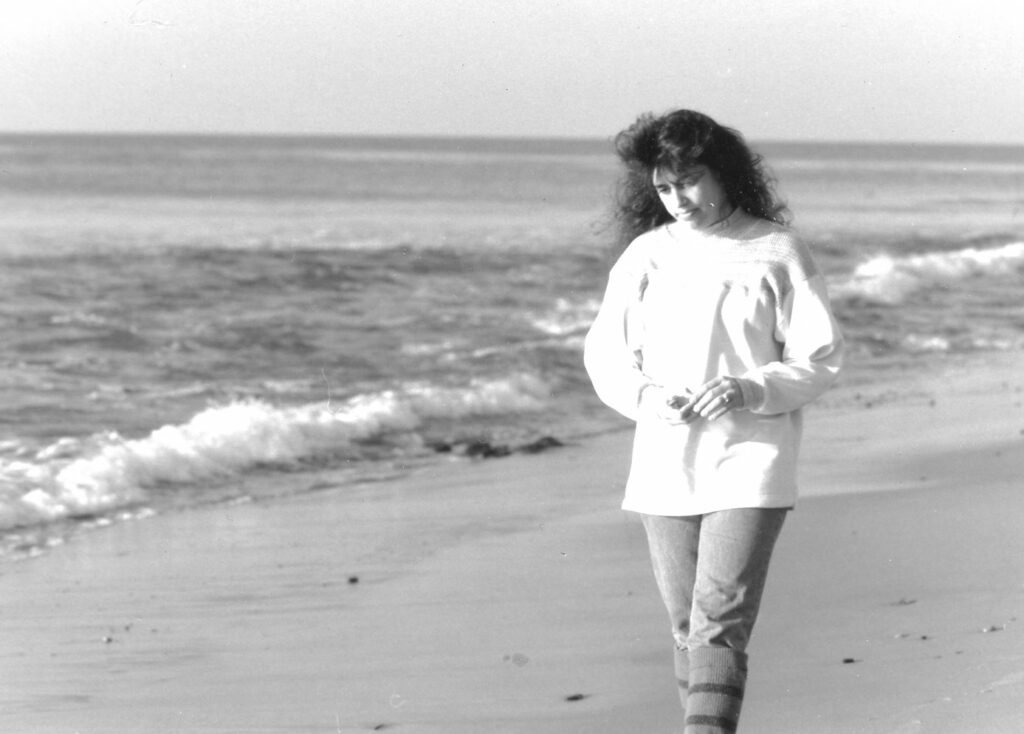 You hailed from that larger-than-most small town of Sacramento—a redhead with freckles no less. Meeting you  long ago in Jack Segal’s evening extension class on songwriting at California State University Northridge it seemed all your songs were a little bit country. And I was a whole lot of blues—in more ways than one. You believed in happy endings and I thought they had practically gone extinct. You were still naively hoping to write a song Bobby Sherman would record to kick-start your career as a famous songwriter in L.A. And I was writing a somewhat cynical little musical called (and I kid you not) “In Search of Prince Charming.

Do you remember how one night during a break in class I asked you if you might want to have coffee with me, though I didn’t drink a drop at the time?

We were the cream of the crop in Jack’s class, especially you, who Jack favored in his own peculiar way by doing an impression of John Houseman reading your lyrics in  humiliating fashion.

Do you remember how one night during a break in class I asked you if you might want to have coffee with me, though I didn’t drink a drop at the time? We each were impressed with the other’s songs, but I was the odd girl on the side of the room, next to the wall, who wore suspenders and purple pants. 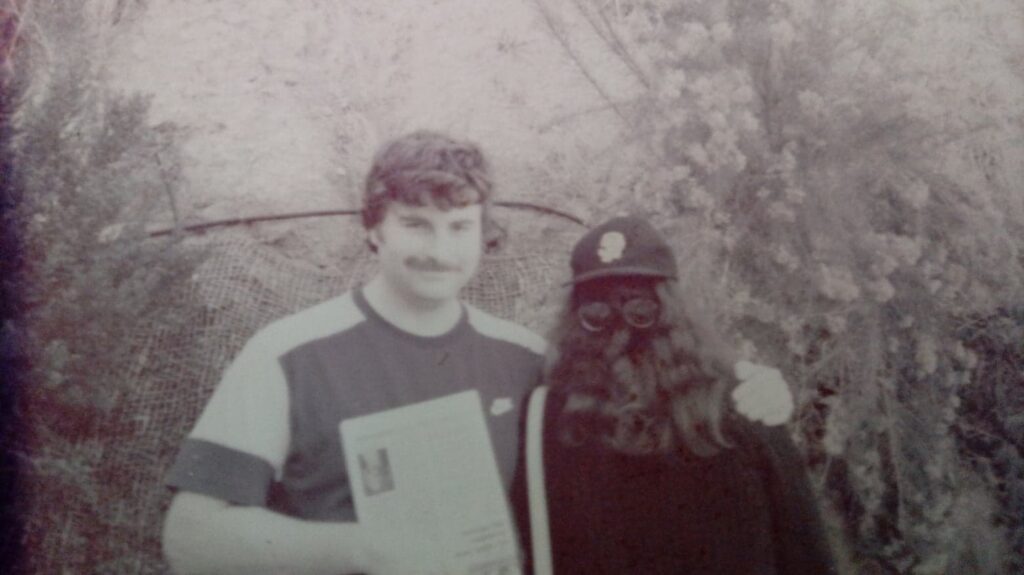 You were always infinitely more personable and accessible. Even so, we eventually wound up at a nearby Tiny Naylor’s (a local coffee shop chain chain that has since gone the way of the dinosaurs) eating dessert and talking our brains out until 5 in the morning. So we ordered breakfast. It was a small, but auspicious beginning. 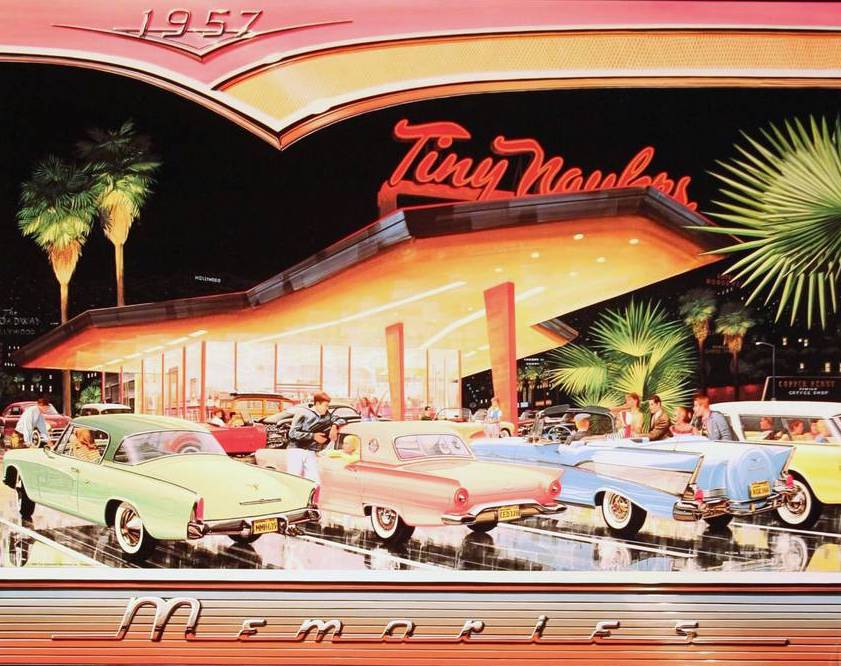 I had never collaborated with anyone before to write songs. You were an experienced and confirmed lyricist who knew next to nothing about music. It was an interesting dance we did as we worked on words and melody together, each coming from  very different points of view. But it was the final episode of M*A*S*H* that brought us together in a kiss. The sweet and the sad. After that, we continued to collaborate. But not so much on paper.

It was Jesus who separated us, quite painfully for a time, and then ultimately brought us back together in a more solid and committed way. We were married in the shelter of my mom’s little teahouse in the backyard, on the side of the hill with 160 pairs of eyes watching. It was your idea, of course, to have us each write a song for the other, and keep it secret until the wedding. I was very surprised when you sang the words: 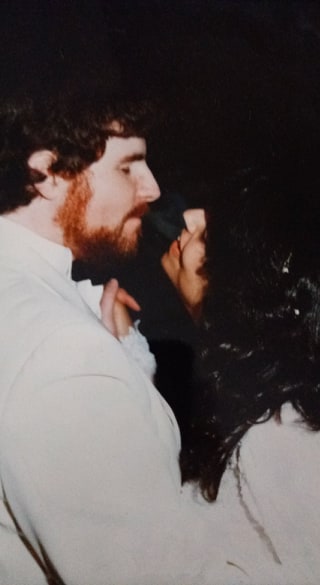 Our marriage must be, in some small way, a testimony to God’s grace. We carried so much childhood emotional baggage into our beginning years, it was a miracle we somehow survived each other. And, as if it weren’t entirely enough for each of us to sort the other one out, along came lovely Dusty Rose, beautiful Bonnie Joy, and the enigmatic Shannon Leigh. Add to that a call to ministry that surfaced very soon after Dusty entered our sphere of influence and began to rock our world, No one can even begin to imagine how entirely improbable (impossible?) it was that God would call us to minister to others.

I remember when Bonnie Joy was diagnosed with autism, just after her 3rd birthday, I read the stats for married couples with a special needs child. 87% ended in divorce. I wondered if we would ever had a chance.

Neither of us could believe when I got pregnant a final time at the tender age of 44 (me) and 46 (you)  with Shannon. And it was at that point that you realized you needed some help beyond your own abilities.

I will always have the utmost admiration and respect for you because of that realization, and that you acted on it. I remember wanting to point to many of the men I knew at church and say, “If Michael can do this, you can too!!” It was a huge step forward toward healing for us both.

You weave words like some people knit fine garments

We were in marriage counseling for 13 years. Sometimes I felt a little like a Woody Allen character, wondering if we would be in therapy forever. But Charlotte Smith was totally God’s provision for us.

You are every bit as gifted as I am, Michael. And more. You have the soul of a comic poet—funny and painful at the same time, with an occasional touch of the raucous nature  I try to keep (unsuccessfully) at bay. You weave words like some people knit fine garments.

When we originally started out on the road together as a family, we homeschooled Dusty and thought we’d do the same with Bonnie. But Bonnie’s diagnosis made that impossible. We spent time soul searching, praying, wondering whether we should continue IPM or not. And when we both felt we weren’t done yet, you stepped down to serve. Not perfectly for sure—very humanly indeed. 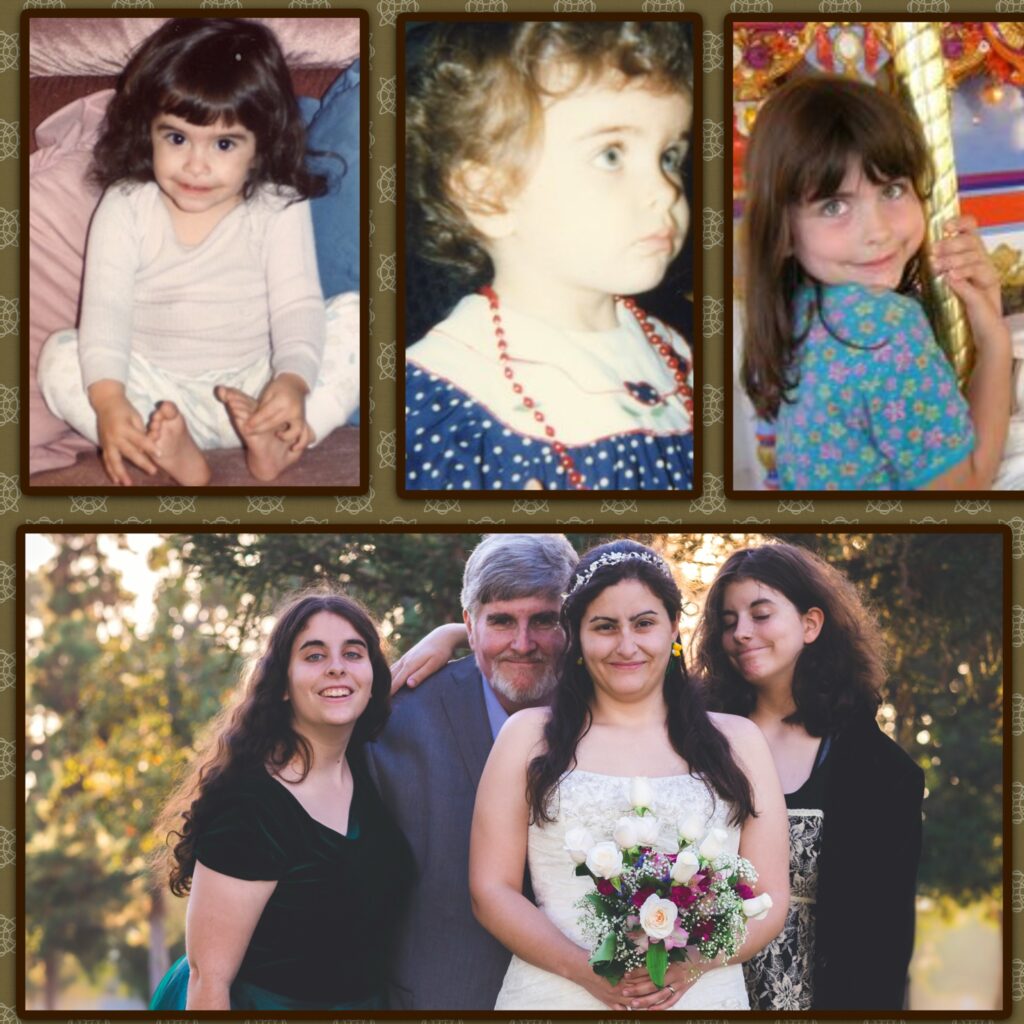 Nevertheless, you stepped up to the plate and sacrificed. While I went out to share our songs and stories all over the world you stayed back with Dusty, Bonnie, and Shannon.

It wasn’t an easy call for someone who naturally did better in the limelight than I ever did. But in your choice there was much revelation, pain, and ultimately, healing.

Today, May 2, 2021 we celebrate 34 years together. I can truly say Michael, you are incredibly thoughtful toward me and the girls. You are much more tender-hearted than I probably ever will be in this life. And you have grown so much as a father toward our daughters. You did a very courageous thing a year or more back with the girls when you disclosed some very difficult moments of your childhood so they might better understand where you came from. 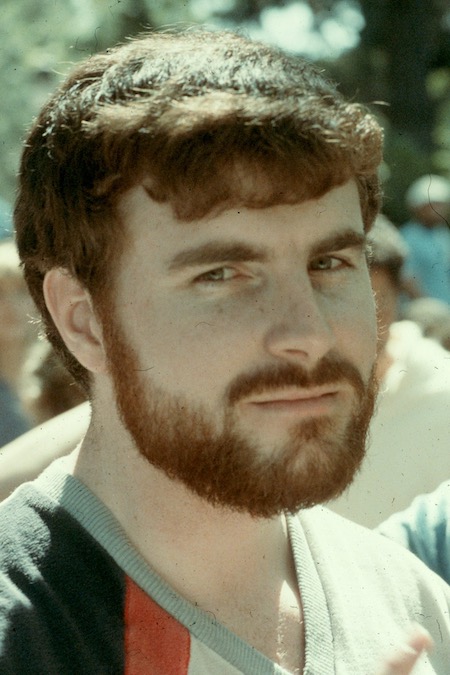 I still remember when we were first dating and you told me only a little bit about your past. I, who was over-analyzing why a fly might land on one window pane instead of another, needed to know if you understood how it all affected you. And your answer at the time was simply, “I will never do what they did.”

It was our girls who helped you realize it wasn’t quite that easy. But I believe it was your willingness to be humbled and get help which ultimately changed the course of our marriage, allowing us to recommit as we did 4 years ago in July, and to celebrate today. 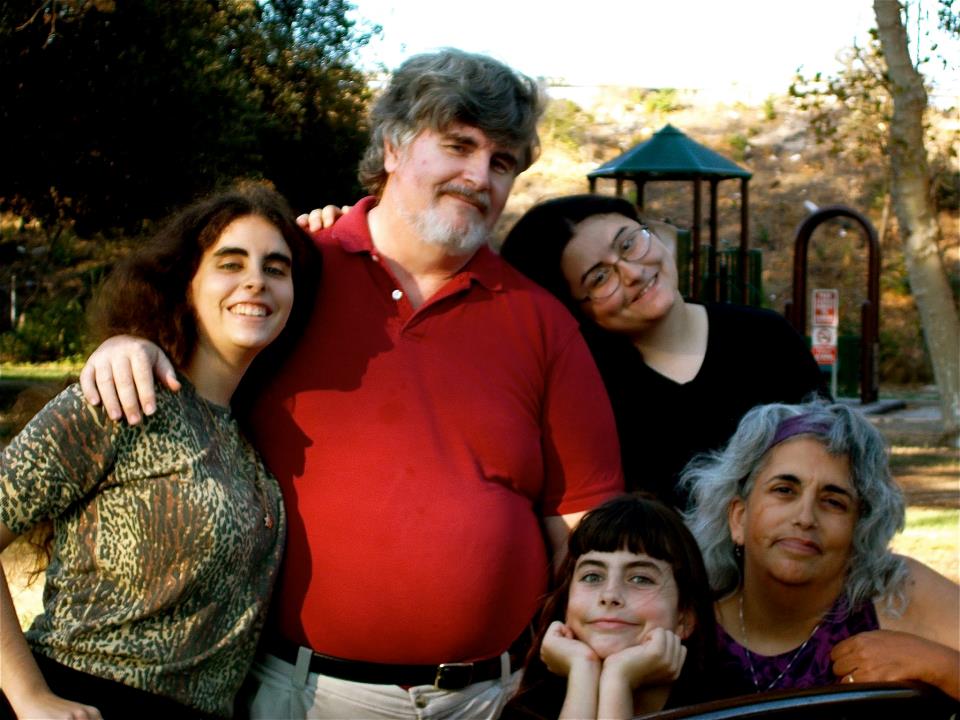 It hasn’t been an easy road by any means… but it has most definitely been worth it. I wouldn’t trade all that we have shared for anyone else’s story.

And you know what, Michael Francis?

It IS quite an honor to be an O’Connor. 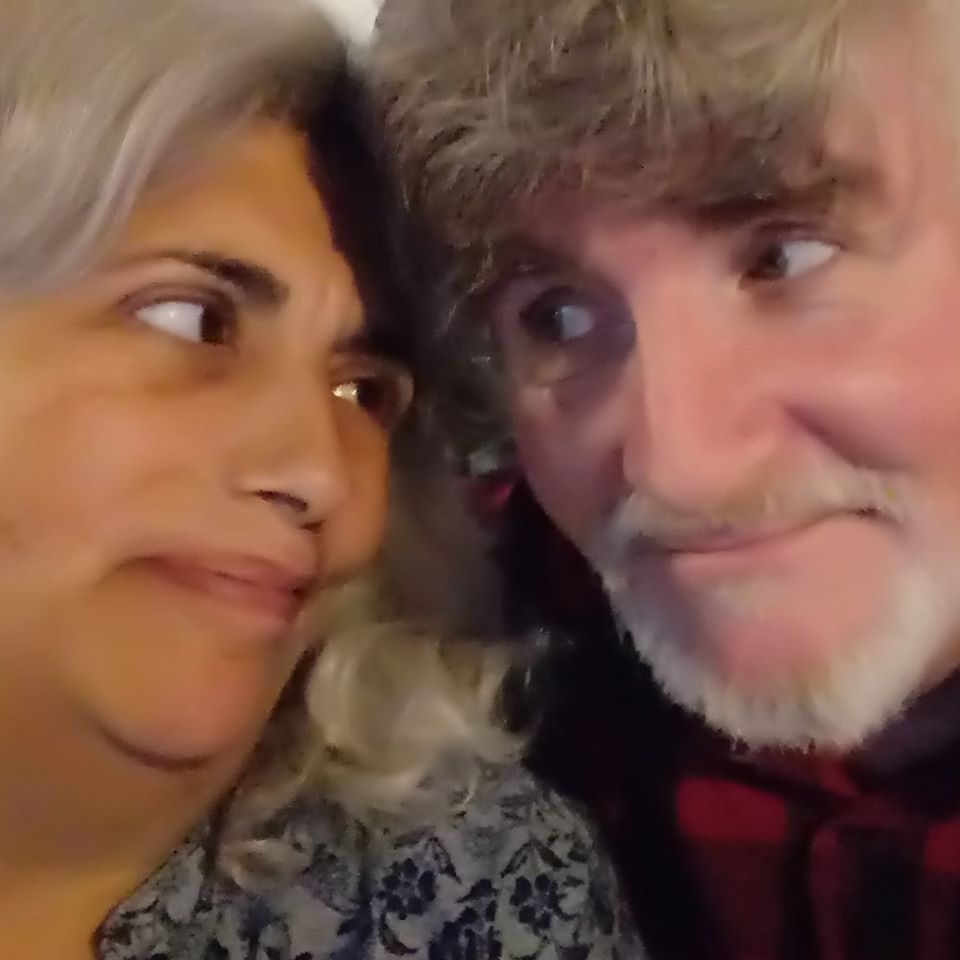 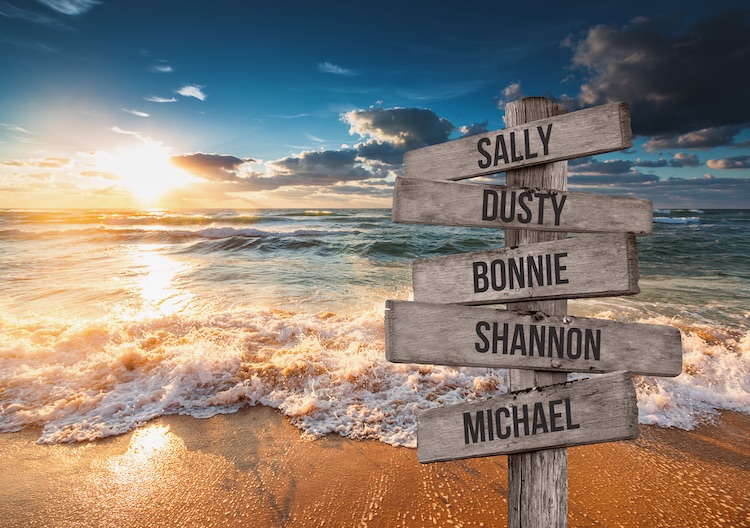